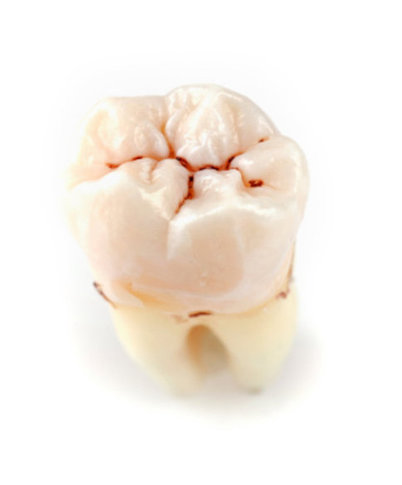 Sealants are a widely accepted way of covering over the deep grooves commonly found on the chewing surface of permanent molars, in order to keep bacteria out and prevent cavities from getting started. We monitor the eruption of a child’s two sets of permanent molars, usually occurring around the ages of 6 and 12, placing sealants at the earliest opportunity after the entire chewing surface is exposed. So the intent is to “seal” the grooves and keep the tooth pristine and healthy.

One can gain an appreciation why this might be a good idea just by looking at the photo of a real molar. The deep grooves seen here are common, and this is where many molars are most susceptible to getting their first cavities. But what cannot be seen here is how deeply below the surface these grooves can actually extend and how narrow they become, forming what is known as a fissure. It is impossible for a toothbrush to clean any deeper than just the surface opening of grooves like these, let alone the hidden fissures beneath, but bacteria and food debris have no problem reaching much deeper. It is just a matter of time before the deeper enamel softens and the cavity begins, hidden just under the surface. These cavities can be undetected and have sometimes already begun when a sealant is placed over the top. An X-ray generally will not reveal such a cavity until it has progressed about 2-3 millimeters into the softer sub-enamel layer. So you can begin to appreciate some of the nuances of sealants and why they should not be placed casually. Each tooth needs to be examined critically by the dentist and a decision made as to the integrity of the grooves, since not all molars have fissures. Then it can be treated appropriately. A sealant that is done well, with any deep grooves cleaned out and the sealant placed conscientiously with excellent technique, can last for years if maintained and monitored for leakage or other breakdown.

The actual technique for placing a sealant involves several steps after any necessary cleaning of grooves or fissures is done.  First the enamel surface around all the grooves is cleaned and roughened with a micro sandblaster followed by the brief application of an acidic gel that microscopically etches the enamel surface. After this is thoroughly rinsed away, we apply pure oxygen/ozone to kill bacteria hidden within these grooves and deep fissures. A layer of bonding resin is flowed over the surface and down into the grooves. Last is the sealant layer, which is tooth colored and is the consistency of runny toothpaste. This is worked so that it completely fills all the grooves and is then hardened by a small but very bright light tip that we place over the molar surface.

A common health concern about sealants is the actual sealant material and its biocompatibility. Sealants are a type of bonded resin, with much the same chemistry as bonded composite fillings. Some sealants contain BPA, which is known to be an estrogen mimicking compound that has been associated with a number of health issues including breast cancer. The sealants we use contain neither BPA nor fluoride.